I had an enjoyable yum cha lunch with a group of Malaysians and Singaporeans today.

When you put a bunch of Malaysians and Singaporeans together, the conversation topics often revolves around politics and food.

It was during this conversation that I came across the familiar name of this dish called Singapore Noodles.

I’ve seen and heard this name many times when I was out of Singapore. And each time I come across this dish, I feel a small twinge of bitter irritation.

Apparently, this so-called famous Singaporean dish is an integral part of the Singaporean food culture. Even in Malaysia, our closest ‘relative’ in food culture, have this dish, as confirmed by two of the Malaysian dudes at the lunch.

So why do I feel indignant at a Singaporean dish that promotes the wonders of Singaporean food culture worldwide?

Well, it all started with a couple of conversations with People Who Are Duped Into Thinking That Singapore Noodles Originated From Singapore (PWADITTSNOFS). Or Pwadittys. Simpler.

Usually, when they find out that I’m Singaporean (after the initial mistake of calling me Jap boy or Korean boy), the topic ALWAYS go on to our food (and of course, the superb cleanliness of our country. Tip: We hire an army of cleaners to clean up our dirty deeds).

As usual, the famous Singapore Hainanese Chicken Rice would pop up.

If you don’t know what that means, here’s a picture:

(Taken from Wikimedia Commons) The eggs are complimentary.

Then, sometimes, about 90% of the time, they would mention Singapore Noodles.

This usually elicits a response from me:

Pwadittys: “Yeah, the famous Singapore Noodles. You know, from Singapore?”

Why else would it have the name of my country in front of it?

The problem is that, there is many different kind of noodle dishes in Singapore, so usually I’ll try to get more details in order to get the exact name of the dish, rather than the vague name “Singapore Noodles”.

Me: “What do you mean by Singapore Noodles? Could you describe it to me?”

The problem with Singapore Noodles is that because it is available worldwide, the dishes varies widely according to different tastes. So a Pwaditty might go:

“Oh, well, it has thick, yellow noodles, fried with lots of vegetables and sometimes with beef or seafood.”

Me: (After some thinking) “Ah, you mean Fried Hokkien Mee.”

This is a picture of Fried Hokkien Mee:

Fried Hokkien Mee is Fried Hokkien Noodles. It usually consist of thick yellow noodles (mee) fried with prawns, squid and some vegetables in a thick sauce.

Anyway, when I mention Awesome Fried Hokkien Mee, I usually get a puzzled look and the Pwaditty would usually go:

At this point, another Pwaditty might intervene, and usually with a different description:

“Actually, the noodles is rather thin. Something like rice vermicelli, you know?”

Here I am, thinking that I finally nail down the dish that was described to me when my suggestion get shot down again.

Both Pwadittys would usually give me an extreme look of confusion and say:

“NO, I mean SINGAPORE NOODLES.”

By then, a third Pwaditty would intervene,

“Actually, the Singapore Noodles I tried had dark sauce all over it.” 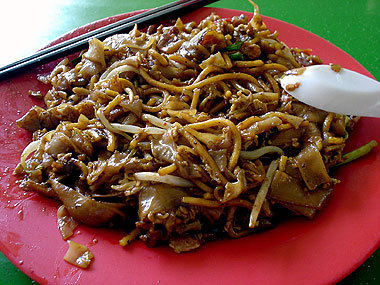 By this time, the three Pwadittys would look at me in great consternation, angry that a Singaporean boy would be so out of touch with his own culture, especially a culture that places a great importance on good food (with disastrous cholesterol results).

So in order to prove that I’m not an ignorant idiot, I start throwing out all the names of the famous Singaporean noodle dishes:

“Do you mean Wanton Mee?” 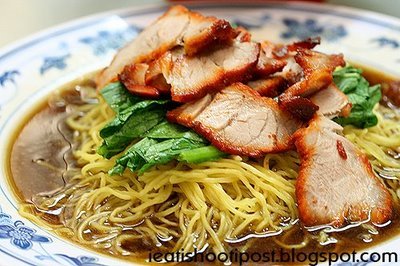 Nope, not this either. 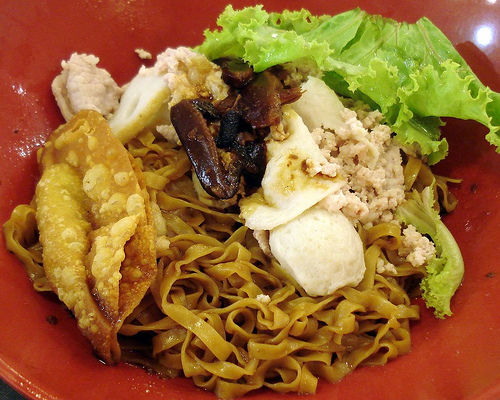 (Taken from The Travelling Hungryboy)

“No, NOT THAT!” chorused the Pwadittys.

After 15 minutes of going through a litany noodle dishes that I can think of, I stare at the Pwadittys in exhaustion. The Pwadittys would look at me with great pity and would gently say:

So today, during the conversation at lunch, the Singaporeans would explain to the Malaysians that there is NO SUCH THING AS SINGAPORE NOODLES, while the Malaysians explained to us that the dish existed in Malaysia. I didn’t take part in the debate, as I was exhausted by the numerous debates previously. But I was curious about how the Malaysians came to know about this dish too. So with a little detective work on Google, I found a Wikipedia article that stated:

The dish appears on the menu of almost all Chinese-style (Cantonese-style) eateries in Hong Kong, and is also very popular in English,Australian and American Chinese cuisine. It is important to note that Singapore style noodles is not a cultural product of Singapore. Its naming may have been based on the stereotype that Singapore cuisine is generally spicy, and might have originated from an enterprising restaurateur eager to add a dash of exoticism to his menu.

You can see the full article here.

Here are the pictures of two variants of Singapore Noodles: 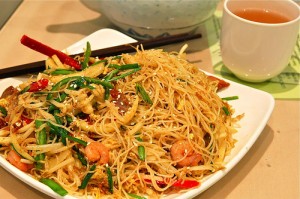 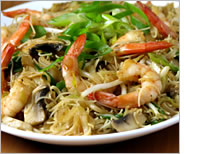 In the MeditterAsian website, it stated that “This spicy speciality of Singapore…” Although we do have many spicy specialities, this is not one of them.

The next time someone mention Singapore Noodles, I will look at them in the eye and very calmly say:

“Only Pwadittys believe in that.”

I mean you don’t go up to a German and ask:

“Hey, you know that German Beer? It is dark brown, with a very hoppy taste?”

Well, let’s see if the German blitzkrieg your ass.

3 thoughts on “Singapore Noodles Does Not Exist In Singapore”