I went to IMDb.com (that would be the Internet Movie Database) to do some research on the television series “Bones”. When I said do research on “Bones”, I meant doing research on the actress Emily Deschanel. But that’s another story.

On the hompage of IMDb.com, there was a still shot (also known as a picture) from a movie. I was immediately drawn to photo because it featured this certain actor: 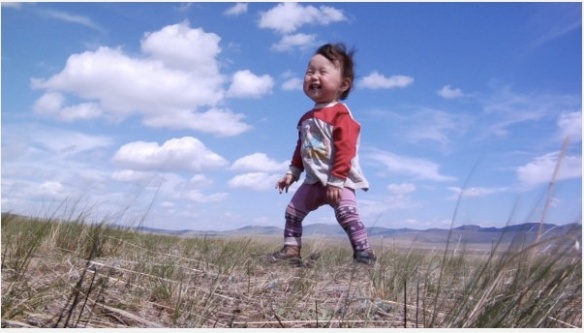 Well, I realized it wasn’t a sequel when I saw the title of the movie, which is “Babies” and read the description of the movie.

Basically “Babies” is a movie that follows the lives of four babies from around the world for one year. More information can be found here: http://www.imdb.com/title/tt1020938/.

While the concept is certainly very interesting, I can’t understand who would pay to watch a movie based on the lives of four babies unless they are either people studying psychology (what I used to study), anthropology (studying that next semester), education (my future career?) or anything else relating to children.

Or probably people that love babies.

And if you’re those people that love babies, then you should do what this person suggested on movie’s message board:

But you can’t deny that the still shot is quite a piece of work. The Mongolian baby does looks very happy.

On an entirely different topic, since I realized I haven’t been posting up my favourite current music or songs, I’ll start doing it again.

I came across this music a few months back and liked it a lot (still do). It is from a band called Action Action. They are not that well-known yet and have only produced one music album. If the song sounds familiar to you, that is because it came from Gillette commercial:

It also featured a certain Mr. Woods before all the … well you know.

Now if you excuse me, I have to get back to my “Bones” marathon watching.